The new Gmail app from the Gmail team isn’t technically just an email app, at least if you ask them. It’s called “Inbox,” and it’s being released as an invite-only system that works on the Chrome browser, Android phones, and iPhones. It feels completely native and fast on all of those systems. But it’s a native and fast app that does something 10 degrees away from what you’d expect an email app to do. My first impression of Inbox is that it’s really great, but a little weird.

The basic idea is this: it’s still a Gmail app, but instead of giving you the traditional list of emails, it tries to intelligently give you more information so you don’t have to even open them. Google Now-style info cards appear right in line with your message list, including things like flight times, package tracking, and photos.

It also tries to intelligently “bundle” emails into groups that you can quickly dismiss. So instead of having those annoying category tabs in Gmail, you have all your promotions and whatnot collapsed down into a single line in your Inbox. You can drill in and “pin” the ones you want to save and then dismiss the rest. Google is also applying its algorithms to automatically parse out things like phone numbers and addresses when you need them. 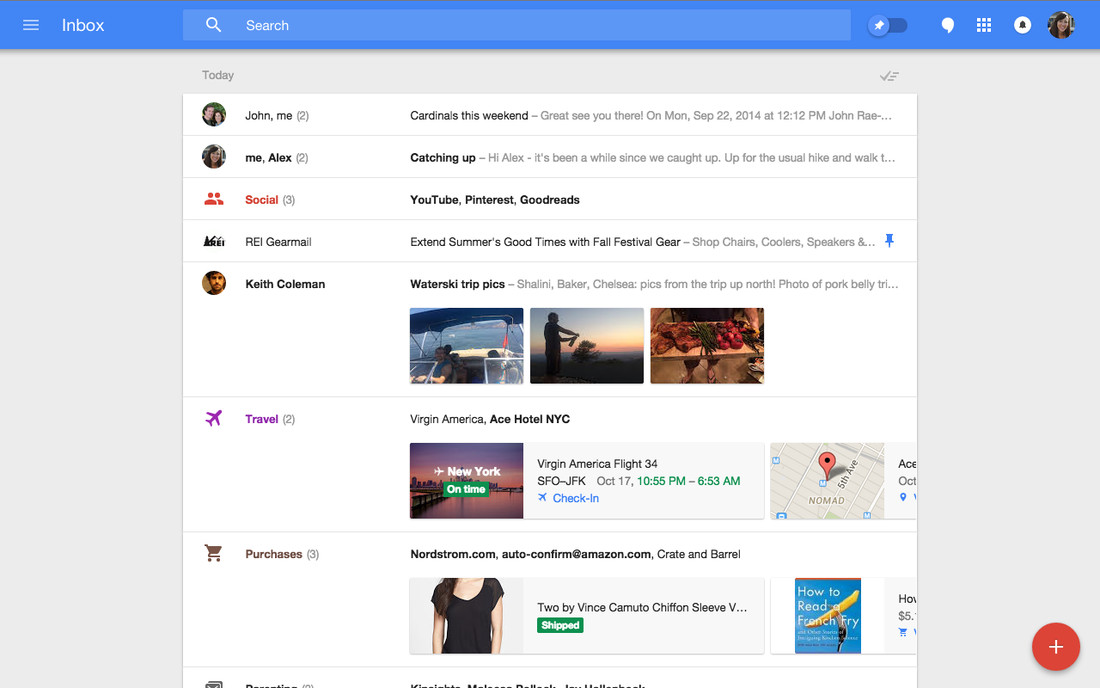 THE IPHONE FINALLY HAS A GREAT GMAIL APP, SORT OF

Inbox also does the same sort of email triaging that has made Mailbox, Acompli, and other Gmail apps so popular. You can “snooze” a message away and have it reappear at a certain time or a certain geolocation. You can also add standard Google Reminders to your inbox, and they’ll also appear in Google Now (as an aside: dear Google, please either finish this “Reminders” project and have it replace Google Tasks or fix Google Tasks. Love, literally everybody who has tried to understand your product portfolio).

But unlike those other apps, Inbox has a competitive advantage: it’s made by the Gmail team and can directly access Gmail without the IMAP hoops that other apps have to jump through. It also, apparently, has another distinct advantage: a huge and enthusiastic team of engineers and designers behind it. Enthusiastic enough that when they heard a reporter with a camera would be within spitting distance, they requested a group photo to commemorate the launch. And so: 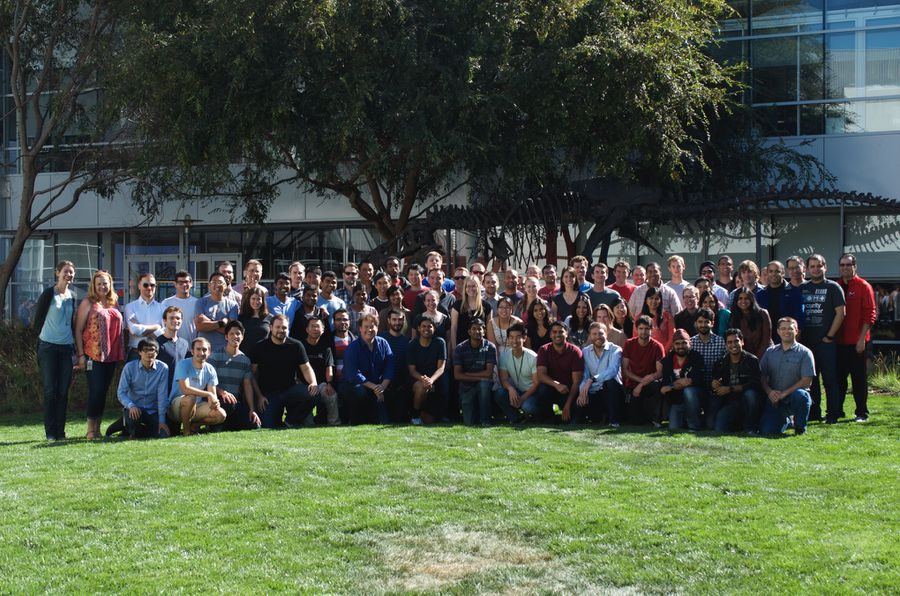 As a product, Inbox uses different metaphors than Gmail — or even email. You can sort of map the metaphors as you use it: stars become pins and labels become bundles, for example. But they don’t map perfectly and users will need to spend some time with this new way of thinking about email before they’ll know if it’s any good. Fortunately, Gmail won’t go away if you try Inbox, they just use the same data. Inbox is basically your email, but mediated by Google. It’s the Google Now version of your regular Inbox.

IT’S GMAIL, BUT MEDIATED BY A GOOGLE NOW ASSISTANT

Alex Gawley, product director of Gmail (and now Inbox), says that he and his team wanted a “fresh start” that wasn’t burdened by the 30 years of baggage that underlies email.

For now, Inbox seems more directed to personal email than business email. In fact, it won’t work on most Google Apps for Business domains at all, justGmail.com. Gawley says “we initially focused on the consumer use cases,” but that he and his team are already using it for their work email. But there are “a ton of additional things that we will do that will make it great in a business context as well,” he says.

It’s also a great showcase for Material Design, the new design language for Android Lollipop. Animations are fast and smooth, text is clean, and the menu bars areaggressively colored. Those design elements are a bit more muted on the iPhone version, but they’re still present. “We wanted these apps to feel like they’re at home on every platform,” says Jason Cornwell, lead designer for Gmail (and now for Inbox), “but they still should feel really coherent.” And it does, even if the particular interface details vary from Chrome to iOS to Android.

A GREAT SHOWCASE FOR MATERIAL DESIGN

The ideas underlying Inbox are the standard kind of “completely reinvent X for mobile!” (my scare quotes, not Gawley’s) that can either be completely ho-hum or surprisingly different. Inbox seems like the latter, but I’ll need to wait for an invite just like everybody else to find out. Yes, Google has chosen to engage in a naked attempt at viral marketing by limiting this free app to an invite system. It’s certainly not because Google needs to limit access to keep thing running: “We’re good on servers,” jokes Gawley. To get on, you need an invite from a friend or you can email inbox@google.com to get added to the waitlist.

Updated 2:55 PM Oct 22nd: This article has been changed to reflect that Inbox is not available for Google Apps domains nor does it work on the web unless you’re using the Chrome browser.